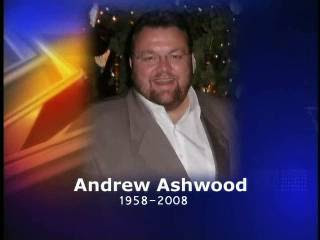 Sad news out of Los Angeles last week, my friend Andrew Ashwood passed away. Andrew was putting up a strong and couageous fight against cancer but suffered a massive heart attack last week and did not recover. Andrew was only 51. Most recently he was the Vice President/General Manager & Executive Producer of the FOX Sports Radio Network

You may not know him by Andrew, but you may have known him as by his radio name, BJ Hunter. Andrew and I worked together in the 80's at KOOL AM & FM. He was the Program Director and Morning Drive jock and I was the Local Sales Manager.

We had a lot of good times together at KOOL. And there were a lot of GREAT radio stories from that time. I'll share a couple that can be published....

Andrew was an innovative PD who always had BIG ideas to get publicity for the station. As the wall was coming down in Germany, he decided that he wanted to do a live broadcast from Checkpoint Charlie at the border of East and West Berlin. It was the "Rock the Block" promotion. He came to me and asked me if I could trade the air fare and hotel for the trip. I said I would try, but if I did, I wanted to go on the trip. Needless to say, I was able to trade out a great hotel in Berlin and first class tickets on TWA for the trip. Ten of us packed our bags and were off to Berlin for the live broadcasts. A great promotion, lots of publicity for the station and a lot of fun. To this day, that trip is one of the highlights of my life.

A second story that is memorable, which my friend Bruce Olson our National Sales Manager at the time disputes, has to do with over selling commercials on the radio station. At that time in the 80's we were only running nine - ten commercials an hour. Bruce and I had a habit of over selling the station on the weekends. It was always a constant battle to get Andrew to allow us to run the extra spots. So we would have to plead with our General Manager to let us have the extra inventory. Ultimately, the GM would say, "BJ... just run the &^%$%* spots". The irony of this story is (and this is where Bruce and I disagree) that when we oversold the station it was to only twelve units an hour (Bruce thinks it was more like 20). Twelve units was a ton of spots back then, but is the norm or even on the light side today.

There were also, the limo's, the staff retreats, the KOOL Cafe, trips to Arbitron and a lot more. Andrew was a smart and innovative broadcaster and a fun guy to hang around with.

Here is the Obituary from the Arizona Republic...

Ashwood, Andrew
VP and GM of FOX Sports Radio, died of a heart attack November 13, 2008. He was 51. Once known as "BJ Hunter" in his days as a DJ at KWTI Milwaukee and KOOL FM in Phoenix, Andrew later became Program Director at WQAM Miami. A natural leader, Andrew took over as PD, and then Operations Manager, at News Radio 1200 WOAI in San Antonio, where he developed a passionate affinity for the Spurs. In 2003 he joined FOX Sports Radio where his "DARE to be Great" motto helped give the network direction as its affiliate base tripled in size. A lifelong Green Bay Packers fan, Andrew inspired co-workers and friends, constantly reminding them that "Winning is the Only Option," his unique adaptation of Vince Lombardi's "Winning is the Only Thing." Shortly after his 50th birthday, Andrew married the love of his life, Sandra. Unfortunately he was diagnosed with cancer 3 months later, and fought valiantly for a year and a half, before suffering a heart attack on Monday. Andrew's unwavering positive outlook on work, on sports, and on life, carried over into his fight with cancer as he promised it would never beat him. Ironically, it did not. Andrew is survived by his wife Sandra Ashwood, his mother Mrs. Helen Ashwood, three sisters, Ann Ashwood, Lorry Stiles and Amy Ashwood Checcinato. He is also survived by his nephews and nieces; Chris and Spencer Stiles, Rebecca, Zacary, Anthony, Hannah and Abby Piper, Andrea and Marta Checcinato. The family is extremely grateful to the staff at M.D. Anderson & City of Hope for their loving care of Andrew. Services will be held on Friday, November 21, 2008 @ 2:30 p.m. at Forest Lawn Mortuary, Old North Church 6300 Forest Lawn Dr., Los Angeles, CA 90068. In lieu of flowers, donations to 'City of Hope the Andrew Ashwood Fund' would be appreciated. Published in The Arizona Republic on 11/20/2008

Click here to see a tribute to Andrew by San Antonio Sports anchor Don Harris.
Posted by Michael Mallace at 6:48 AM

I know I'm 10 years too late, but... was this the same BJ Hunter who was on KOPA in the mornings? I don't know about KOOL, but as teenagers my brother and I listened to the KOPA morning show with BJ Hunter and...Chaz Kelly? Maybe? Anyway I have some recordings of their skits and stuff that I'd like to share, maybe on YouTube or something.

I just watched a hilarious video of Jack Preda’s annual “beginning of the summer” party, and the videographer was BJ. Absolutely BJ at his best. We miss you BJ