My Favorite Gadgets of 2009 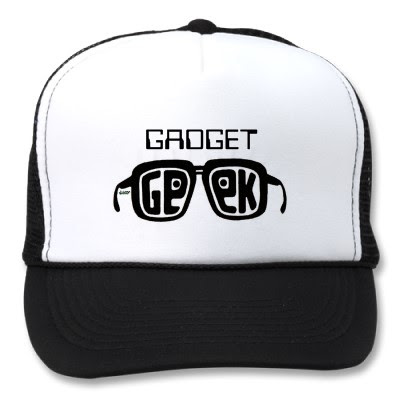 I had lunch with my friend Mike today, he knows that I’m gadget geek. He asked me what new gadgets I have? I paused for a second, thought about, it and mentioned a few. As I was driving home tonight, I was pondering the question some more and came up with my list favorite gadgets for the year.

Magic Jack - Cheesy infomercials, but I have to tell you this is great, especially if you travel out of the country. It is a VOIP device that hooks up to your computer that allows you to make phone calls for a low annual fee from anywhere you have an internet connection. You plug the Magic Jack into your computer, plug a phone into the Magic Jack and you are good to go. If you don't have a phone, you can use the computers mic and speakers or plug in a USB headset.

Blackberry Tour – Love this phone, especially with the 3.2 mega pixel camera and expanded memory for videos and music. It is a 3G phone as well, so you can use it internationally tool. I have the Shazam app on it so I can identify songs that are playing within earshot of me. Also, have an app called Nobex Radio Companion which allows me to see what song and or commercial are being played on just about every radio station in the country in real time, there is also a streaming feature to this too. My favorite app is called Tetherberry. Tetherberry allows me to use my Blackberry as a wireless broadband modem and hook it up to my laptop when I travel. The other day I took the Amtrak train from Downtown Los Angeles to San Diego and had an internet connection the entire time. I needed Tetherberry because Sprint turned off the modem feature on the phone. Tetherberry bypasses that and taps into your internet/data plan to access broadband.

Audio Technica USB Turntable - This turntable hooks up to my computer and I can play and rip all of my old vinyl to my iTunes and iPod. Lots of fun! And there is a difference between vinyl and cd’s!!!

Minio Flip HD video recorder – This is a cool gadget that fits in your hand and allows you to take HD videos and download them to your computer and beyond.

Garmin Nuvi GPS – I love this and use it even though I had a navigation system built in to the car. It is portable, easy to program and use.

Boston Acoustics Receptor Radio HD – Fun new HD radio that allows me to listen to all of the new HD channels programmed on the over the air Radio stations.

Bose 3-2-1 GS Series III Home Theater System – This little home theater system has a DVD and storage for hours of music. I also has huge sound. My friend Al, who is an audio freak and purest helped me install this system (that's story is for a future post). He was shocked at the sound that came out of it.

Kindle Wireless Reading Device – Just got this for Fran for Hanukkah. I have not used it yet but I was playing with my friend Michael P’s Kindle in Los Angeles and it was really cool. I like the fact that you can download books, magazines and newspapers wirelessly from just about anywhere.

32 inch flat screen monitor – I turned 50 this year and was having trouble seeing what was on the screen of my seven year old notebook computer at work. I broke down and got this huge monitor that has a webcam built into it. I can see again and video chat on Skype and I chat too.

HD TV Tuner with remote – This device plugs into my computer and has an external antenna along with a cable connection and it turns my MacBook into an HD TV and DVR. Another fun toy to travel with.

There you have it, my list of favorite gadgets for the year
Posted by Michael Mallace at 9:03 PM 1 comment:

Email ThisBlogThis!Share to TwitterShare to FacebookShare to Pinterest
Labels: gadgets 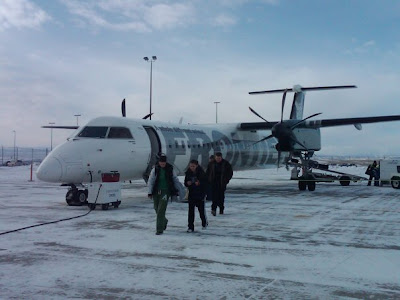 I had the great honor of being invited to speak at the American Advertising Federation Black Hills Chapter monthly luncheon this week in Rapid City South Dakota. I was asked to give my impression on the future of radio and what broadcasters needed to do to be successful. If you know anything about radio people, you know that we love to talk about radio and give our opinions. So I jumped at the opportunity to speak with the group. Although, I didn’t quite think it through when Josh Barsch invited me a few months ago, I did not take into account that it would be snowy and -2 degrees when the plane landed.

Nonetheless, the group in Rapid City was terrific, a great bunch of advertising pros. While I hope that I imparted some relevant and practical information, I realized that we can learn a lot from the pros in the smaller markets.

I had the opportunity to meet Michael and Lisa from a local radio group. They have been at the stations for more than ten years each. They have created great relationships and equity in the market with their clients, non-profits and community leaders. These people get it. They are in the trenches everyday and doing things right. They are big on service and providing value and results to their customers.

Just as in most markets across the country, revenue is down due to the economy but not down nearly as much as it is in the larger markets. I realized that these people are successful, because they are dotting the I’s and crossing the t’s. They are doing the basics and doing it quite well. They don’t rely on a lot of agency / transactional business; they are knocking on doors, the doors of the service categories and local retailers. They are selling ROI not CPP or CPM. Wow, how refreshing. Oh, and by the way, they all seemed passionate about what they were doing too!

Josh and Nicole from the AAF were very gracious and thanked me for speaking. I should be the one thanking them. While I guess I was supposed to be the professor, I was also the student while visiting the Black Hills and for that I am grateful.

And a side note. I was interviewed by the local FOX TV affiliate KEVN. Click here to see they story that ran last night at 10PM in Rapid City.
Posted by Michael Mallace at 9:25 PM No comments: