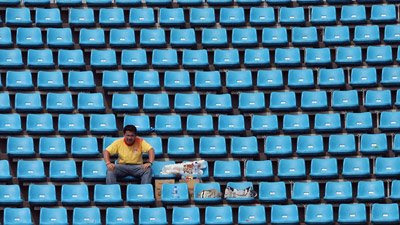 I read today that NBC Universal has hit the jackpot with their Summer Olympic coverage. the ratings are huge and they have generated over $1 billion in advertising. Just in the last week they have added an additional $10 million dollars to their coffers because they held back inventory in anticipation of big ratings and additional demand for TV ads.

This is in stark contrast to all the empty seats you see at the venues when you watch the events on television. I read that the Beijing Olympic Organizing Committee is actually busing in volunteers to fill the seats so the events don't look so empty.

Allegedly, all of the events are sold out and the majority of tickets go to corporate sponsors who don't use them for the preliminary events.

It just strikes me as odd that NBC is breaking ratings and revenue records, yet the seats are empty for a world class event that only happens every four years.

I don't get it! If in fact the corporate sponsors have extra tickets, I think they missed an OLYMPIC size opportunity. They should have given the tickets to the locals or the tourists who traveled to China and did not have tickets to the events. All this would do is create good will for their brand. What could be so bad about that?