The "Multi Media" Inauguration By the Numbers 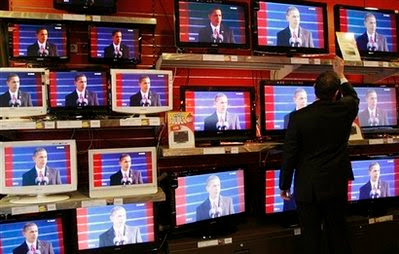 I read with interest the "TV By the Numbers website" today and they announced according to Nielsen ratings that The Obama inauguration was watched by 37.8 million, second only to Reagan’s 41.8 million in 1981. The story went on to say that News websites at their peak had 5.4 million visitors at per minute at it's peak.

Personally, I took advantage of all the different mediums on Inauguration Day. In the morning on the way to work, I listened to the radio, in the office, I listened on the radio and I watched with great interest via the internet on my computer, back in the car on the way to an appointment, I was listening on the radio again. As a side note there was absolutely NO traffic on the roads as I drove from downtown Scottsdale to downtown Phoenix during President Obama's speech.

Throughout the day while not near a radio, TV or internet computer, I was checking the Inauguration news on various news websites through my Blackberry. When I got home in the evening, I watched the entire inauguration and subsequent festivities (six hours) on my DVR which I had recorded earlier in the day.

Furthermore, I have been to youtube numerous times to watch President Obama's speech, the flub on his swearing in and the featured music from the Inauguration.

According to the Washington Post, while the Regan Inauguration of 1981 might of had more television viewers than Obama's, there were actually more viewers when you aggregate television and internet viewing? Their math comes out to more than 49 million viewers. I don't know if that even includes DVR/TiVo viewing too.

Either way, It's official, we live in a multi-media world. Even our new President carries a Blackberry!

Here are the links to the stats:

With Right Math, Inauguration Is Second to None

Finally, I thought that the music during the Inauguration was extraordinary. Here are the links to Aretha Franklin singing "America' My Country Tis Of Thee" and "Air and Simple Gifts" arranged by John Williams for the Inauguration and preformed by Yo-Yo Ma, Itzhak Perlman, Anthony McGill & Gabriela Montero.

Click on the links below to watch and listen:

Posted by Michael Mallace at 9:54 PM