The Day the "Geeks" Stole Christmas! 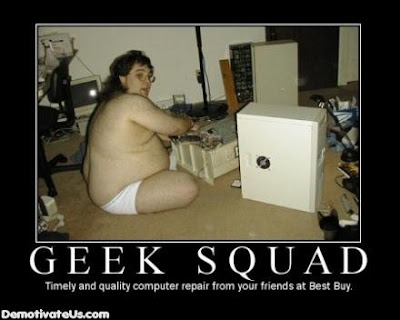 The unthinkable happened on Christmas Eve, my home computer crashed! I diagnosed the problem and determined that it was the power supply that had failed.

I patiently waited until the day after Christmas and went to the nearby BestBuy on 90th and Shea and bought a replacement power supply first thing Friday morning. While in there I saw their Geek Squad department. I asked them If I could bring in the computer and have them replace the power supply for me if I had problems. They said they could and it would cost fifty dollars.

I took the new power supply home, mounted it into the computer and then got thoroughly confused on where the half dozen or so cables went to. Instead of sitting down and reading the directions, I decided I was going to give my self a holiday present and take the computer back to the "Geeks" at BestBuy and have them install it for me. That is when the nightmare compounded!

I brought the computer to them, I had already opened the case and mounted the power supply. All they had to do was connect the wires. The first thing I noticed when I got there was a sense of arrogance by the "Geeks". They told me that they would first have to clean the computer before they installed the power supply. That cost an additional twenty dollars added to the fifty that it was going to cost for the install. I was not happy but saw that I did not have a choice and agreed to the frivolous up-charge. When asked when I could expect the computer back they were ambivalent and said they were not sure but that I should have it within 24 hours.

I went home and late in the afternoon I received a call and email from the Geeks. My computer was ready.

This will come as no surprise to you, Fran was out shopping. I called her and asked her if she could pick the computer up on her way home. She said no problem. An hour later, she called from BestBuy. They would not release the computer to her. They said she needed the receipt. She asked if they could put me on the phone to authorize it? They said no and were quite rude to her.

At around six-thirty Firday night I made it back to BestBuy and picked up the computer. Took it home, plugged it in checked my email and updated some software which required that I restart the computer. To my surprise, the computer would not restart. The power was on, but it would not boot up. Not Happy!!!!

I unplugged all the cables and went back to BestBuy and talked to the arrogant "Geeks". They looked at the computer and said that the CPU fan was bad, the CPU was overheating and was shutting down the system. I told them that I thought that it was strange that before they cleaned the computer everything was working fine and now the fan is bad. They could care less and would take no responsibility for the fan going bad. I think that when they cleaned the computer with their compressed air something lodged in the fan motor causing it to fail. I asked them if they had a fan to replace it with and they said no and that I should go to Fry's electronics and get one and if I wanted they could install it for me for an additional sixty dollars.

I'm getting unhappier as the moments pass. On the bright side, Jude one of the "Alien Geeks" was actually compassionate towards my cause, he was pleasant and helpful, he tried to resurrect the fan but could not. He was nice enough to remove the fan for me so I could take it to Fry's and get it replaced.

A Breath of Fresh Air:

I came home called the Fry's in Tempe to see what time they would be open until and if they had the part. When I called the young man that answered the phone said they closed in fifteen minutes at nine pm. He could not have been nicer of more helpful. He checked his inventory and saw that they did not have the part in stock but had it online and at their Phoenix store, the cost was ten dollars. He gave me the skew number and said I could order it online and have it ready for pickup in Phoenix first thing in the morning. My plan was to pick up the part, return home and install it myself. This was a project that I felt I could handle.

I went online, ordered the part and was off to Fry's first thing Saturday morning. When I arrived I was greeted by an associate who directed me to the checkout line to pick up the fan. I decided that I would walk around the store for a while and look at all the computers, electronics, gadgets, software and more before I checked out.

In my travels through the store, I saw that Fry's has their own tech support and repair service similar to BestBuy. I stopped by the counter and once again was greeted by a friendly associate. I recounted my nightmare to him and asked him if they could install the fan for me and how much it would cost. He said they could, it would cost thirty dollars (half of what the geeks wanted to charge me) and take about fifteen minutes. Oddly enough, the computer was still in the back of my car from the night before, I brought it in, picked up the part and had them install it for me.

When I came back fifteen minutes later the computer was ready, the associate plugged it on for me and showed me that it was working fine. My nightmare was now over.

The irony of the story is, I gave a few BestBuy gift cards as holiday presents this year. In retrospect, that is like putting coal in someone's stocking!

Learn from my mistake go to Fry's!!!!
Posted by Michael Mallace at 8:41 AM